Coffee was introduced to Hawai’i in 1813 when it was brought to Honolulu as an ornamental plant. It was not until the 1820’s that coffee was actually planted in Kona by a missionary named Samuel Ruggles. The Kona typica seeds were planted at various locations around the Big Island of Hawai’i and subsequently flourished in the Kona area despite a lack of care and attention.

Kona coffee first came to the attention of the world in the late 1800’s when it was shipped to Europe.

The first people to settle on the islands were the Polynesians between A.D. 300 and 600. Crossing the Pacific in giant canoes from island to island, early settlers from as far as Tahiti came and made homes on many of the Hawaiian Islands. Named after a Polynesian chief, the Big Island was first called Hawai’i-loa.

The world came to know about the Hawaiian Islands when British Naval Captain James Cook landed there in 1778. He quickly named his discovery Sandwich Island, honoring his Admiral,the Earl of Sandwich. As legends of the islands spread, it became a major source of trade. Sugar plantations were built, whaling ships by the hundreds circled the islands, and pineapples were developed into a flourishing industry.

Short of Hawaiian labor, European merchants brought laborers from China, Japan, Portugal, Philippines, Korea, and Puerto Rico to work on the sugar cane plantations and mills. This melting pot of cultures began to influence native traditions and religion which led to a government being formed, the Kingdom of Hawai’i, by which the Hawaiian King Kamehameha and chiefs controlled all the islands. Kamehameha and his heirs ruled the Kingdom from the time it was a hereditary monarchy through the time it became a constitutional monarchy with an elected legislature. 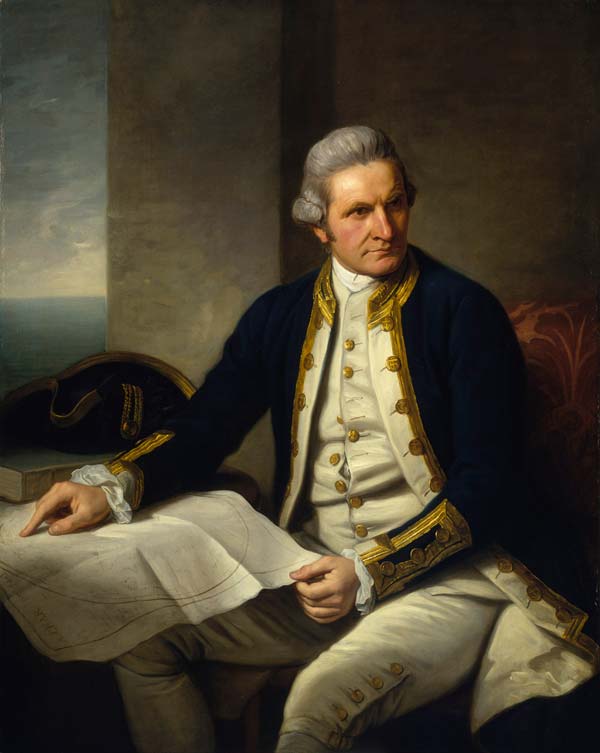 Captain James Cook, The Navigator
“… Ambition leads me not only farther than any other man has been before me, but as far as I think it possible for man to go …”
– James Cook, Royal Navy

The Territory of Hawai’i was created in 1898 when Congress annexed Hawai’i to the United States. The territorial economy was based upon sugar and pineapple, with the economy and government being controlled by the “Big 5” corporations or plantations until the 1950’s.

With the admission to statehood of the USA in 1959, the stronghold on the Hawaiian economy and government by the few major plantations was broken. Hawai’i began its journey to becoming a major travel destination as well as reducing the dependence on sugar and pineapple by developing world class coffees.

A sketched view of the north point of Kealakekua Bay, probably taken from the deck of the British Royal Navy ship, the HMS Resolution. John Webber, 1779.
SHOP NOW
0